Many people remember watching celebrities like Muhammad Ali or Elvis Presley on their living room TVs in the 1970s.

Lorenzo Doumani remembers watching them in his living room.

Growing up the son of a Las Vegas casino landlord, Doumani recalls the heavyweight champ stopping by his house for dinner and hanging out backstage with the king of rock ’n’ roll.

Occasionally, Doumani would be at the Tropicana with Ali and Presley while they practiced karate in a hotel room, he said.

“I got to do karate drills with Elvis and Muhammad Ali,” he said. “Probably not many people in the world can say they did that.”

Decades later, Doumani, a 58-year-old real estate developer, reflected on growing up amid Las Vegas royalty as he prepared to erect what will be his mark on the city.

The project will break ground later this year near the Las Vegas Convention Center West Hall expansion with a planned opening in 2024.

Doumani’s family is responsible for some other Las Vegas landmarks, too.

His grandfather, M.K. Doumani, came to Las Vegas from California some 60 years ago and, with Lorenzo’s uncle, opened the old La Concha Motel, which was across from the former Riviera, in 1961.

A few years later, they opened the El Morocco. Both attracted some of the most well-known celebrities of the time.

“Back then, the La Concha and El Morocco were these state-of-the-art places that appealed to upscale clientele. People like Ali, Liz Taylor, Ronald Reagan, Wayne Newton, Elvis,” he said. “I got to grow up meeting all those people, which was quite a thrill.”

Though the La Concha has long since closed, the motel’s eye-catching wavy façade — designed by famed architect Paul R. Williams — can still be seen today downtown as the reimagined lobby for the Neon Museum.

As a teen, Doumani said, he sometimes worked out with Ali and watched him perform card tricks.

Ali also frequented the coffee shop at the Tropicana, where Doumani’s father, Edward, was landlord for a few years in the 1970s.

He recalled one spring day in 1975 before an Ali fight at the Las Vegas Convention Center as being particularly memorable.

“We were sitting there in the coffee shop,” Doumani said. “All of a sudden, Ali looks at his watch and says, ‘Oh my gosh, my fight is in two hours.’ We gave him a ride to the Convention Center, and I remember sitting next to George Foreman while watching that fight, which was against a boxer named Ron Lyle.”

Doumani still remembers how the fight ended — a technical knockout for Ali in the 11th round.

In the latter part of the 1970s, Doumani spent time with Presley backstage before he performed at the Las Vegas Hilton.

“He would sing gospel songs backstage and quote scripture,” Doumani said. “You couldn’t have met a nicer human being.”

He ate many meals at Peppermill Restaurant and Lounge on the Strip, which his family has had some ownership in since the 1970s. He bought the majority of the property, which is within walking distance of the proposed Majestic Las Vegas site, in 2012.

Peggy Orth, who manages the restaurant, vividly remembers a young Doumani coming in to eat with his family. She was a waitress then.

“His dad and uncle were pretty prominent back then,” Orth said. “He was a rich kid, but always very respectful. Lorenzo isn’t snooty or demanding like some owners would be. You can approach him and I think he got that from his dad, who probably got it from Lorenzo’s grandfather.”

Doumani still stops in “every week or two” at the Peppermill, usually stopping by with his two young boys, Dylan, 13, and Tyler, 10 (he also has an adult daughter, Sophia, who lives in Boise, Idaho).

If Orth isn’t busy, she’ll sit down to visit — often about what the kids are up to — as Doumani eats his usual egg white garden omelet. It’s just like when Doumani’s father took him to eat at the Peppermill when he was a child.

“Those days, when Ed and Mrs. Doumani used to come in, I miss those days,” Orth said. “They knew what this town was built on — personal relationships. A lot of things these days are more corporate.” 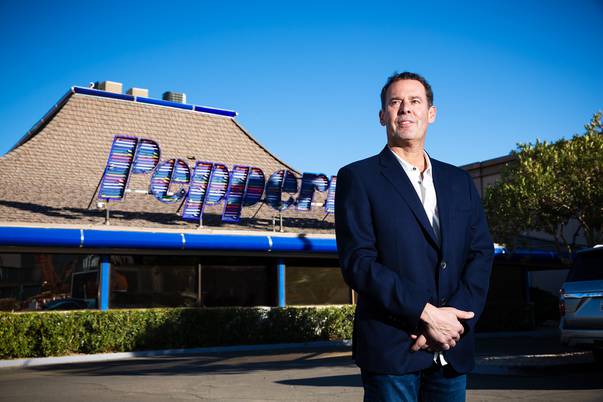 Doumani, who has dabbled in the movie business in Los Angeles, splits his time between Southern California, where his two sons live, and Las Vegas.

Whether it’s Presley, Ali or Steve Wynn — Edward Doumani was an early business partner of the billionaire casino developer — Doumani is likely to have a personal story about the old legends of Las Vegas.

Growing up, Doumani’s family lived near Our Lady of Las Vegas Catholic Church, just northwest of the Strip.

Thinking back to those days, Doumani can rattle off the names of some of the most prominent families in Las Vegas over the past several decades.

He was in the same class at Bishop Gorman High School as Frank Fertitta III, the billionaire Station Casinos mogul, though Doumani took advanced courses and ended up graduating early from Clark High School.

They would later attend the University of Southern California, where Doumani said the pair were study partners.

“I met the Fertittas in the mid-1970s,” Doumani said. “Frank’s father (Frank Fertitta Jr.) was a slots manager at the Tropicana in those days. There’s so many of these families that have been around forever. They’re all still around, for the most part. I think there will always be a little bit of that history in Las Vegas.”

Doumani also palled around with Danny Tarkanian in high school, the son of UNLV coaching great Jerry Tarkanian. He also remembers a pre-UFC Dana White as a personal trainer in the late 1990s who would make house calls.

Tarkanian said he remembers Doumani being “very sharp” from a young age.

“The Doumani family doesn’t get the credit they deserve for being the Las Vegas pioneers that they’ve been,” Tarkanian said.

Doumani was also friends with the family of Jay Sarno, who founded Caesars Palace and Circus Circus and was a mentor to Wynn.

“I remember Jay Sarno saying in the 1970s that we were going to see these megacasino-resorts with 4,000 rooms,” Doumani said. “That was visionary. Nobody was thinking that way back then.”

A niche on the north Strip

In Majestic Las Vegas, Doumani envisions a place for convention visitors and other business-focused customers, a place with an “old school” feel and small showrooms with live jazz acts.

Doumani is banking on a trend that has been in motion for several decades in Las Vegas — more visitor dollars in Las Vegas are spent on the overall experience, not simply on gambling.

“When I was growing up, gaming was 70-something percent of revenues,” Doumani said. “You’d give away a show and do a $9.99 buffet to get people in casinos so they’d lose their money. That’s what used to fuel Vegas, but that’s no longer the case. We’ve become more diverse.”

Before the coronavirus pandemic, taking in a show, concert or sporting event or eating at a renowned restaurant were as important as ever to the Las Vegas experience.

Due to the pandemic, Las Vegas visitation was down by about half in 2020 from the 2019 total of over 42 million tourists.

In the next decade, Doumani expects gaming to make up less than 30% of resort revenues, something that would have been unheard of when his father was in the casino business in the 1970s.

“Las Vegas has almost everything,” Doumani said. “But what I think it should have is a different type of resort, something that’s nongaming, nonsmoking and goes after a different kind of corporate crowd.”

Doumani has high hopes for the north Strip, though he admits the recovery from the pandemic will be “a long road.”

He already has a vested interest in the area. He is majority owner of the building that houses the Peppermill Restaurant and Lounge.

Once the convention industry in Las Vegas — all but non-existent during the last half of 2020 — returns, trade shows like CES, which brings over 170,000 attendees to the city during a normal year, are likely to be a boon for Doumani’s planned resort.

“This is a resilient city with resilient people,” Doumani said. “The people here adapt. When something doesn’t work, we change it. You’re only as good as the people who live here, and we’ve got some great people.”